While teaching a dog training class in 2016, Nicole Skeehan, owner of Philly Unleashed, noticed a young, black Labrador. She’s trained thousands of dogs over the past 20 years as a dog trainer, while developing training and behavioral programs for training facilities, shelters, prisons, rescues, and her own business. But there was something special about Cooper’s demeanor, work ethic, and intelligence. “I first watched him in classes,” said Skeehan. “I thought, my lord, this is one of the nicest dogs I’d ever seen in my life.”

Skeehan asked Cooper’s owner, Katelin Jackman, to let her know if the breeder had another litter like him, knowing that she wanted to train and donate a mobility service dog. Buddha, Cooper’s brother, joined the Philly Unleashed team in August 2017, and applications are being accepted until February 1 to find his partner.

Skeehan and her team of 11 trainers have already trained several service dogs, including Queenie, an adult yellow labrador purchased by a Jersey Mike’s fundraiser for a local family in 2016. Skeehan wanted to do it again, starting from the very beginning, with the goal of donating the trained mobility service dog to someone who needed one. 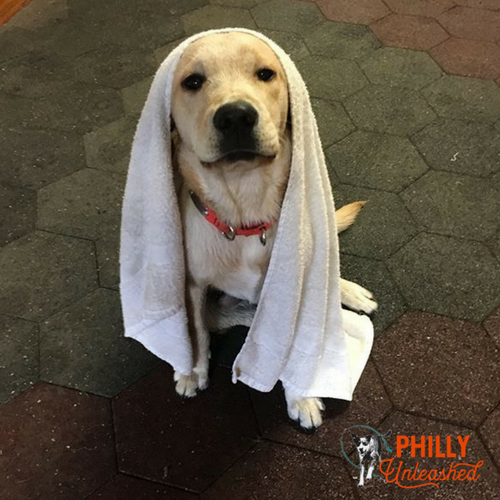 Skeehan found that taking on a service dog project was a natural fit after years of working for and with welfare organizations and shelters. “This was the perfect opportunity to give back to our community,” said Skeehan. “We have the means and the staff to train a great dog, and we wanted to invite others to join us–whether financially or even just in helping us get the word out.”

Growing up in Pittsburgh, Skeehan started training animals early–she took family dogs to obedience school, bought her own horse when she was 16, and earned extra money in college teaching riding lessons. She started training Libby, a Great Dane and her first dog as an adult, at a high-end boarding and training facility. The owner noticed her work with Libby. “He asked me, ‘Are you a dog trainer? Are you sure? Because you’re really good at this,’” shared Skeehan.

Skeehan became the daycare manager of the facility in 2002, while finishing her degree. She also earned her certification through Certification Council for Professional Dog Trainers, becoming a Certified Professional Dog Trainer-Knowledge Assessed (CPDT-KA). She then starting working for Animal Friends, a Pittsburgh shelter, in 2006. A few years later, the PSPCA recruited her in 2008 to build a behavior program in Philadelphia, where she remained until 2011. She moved on to build the training program for New Leash on Life-USA, where she stayed for five years, while starting her business.

It was her position at the PSPCA as Director of Animal Behavior and Training that showed her it was possible to make a living as a dog trainer, and she’s been moving forward full speed ever since. “I still thought I needed to do business things because I had a business degree,” Skeehan said of her career before being recruited by the PSPCA. “I was fighting that I wanted to train dogs and do animal things. I was really excited when PSPCA was like, ‘No, come back and work animals again.’”

She’s found that in dog training, as an unregulated field, studying the science behind successful training methods is important–and worth it. “You can do it,” said Skeehan. “The harder you work, the better you can do at it. Your success is directly related to what you put in. There are a lot of dog trainers who are struggling. You have to work nights, weekends, pick up poop.”

And there isn’t always a solution. “You can’t always fix aggressive and anxious dogs,” said Skeehan. “You can suppress behaviors if you want. If you keep dogs under the threshold of stress, there’s a lot more success.”

Skeehan has always loved dogs, growing up with animals. But she found love wasn’t enough. “No one really studies the science behind why it works,” explained Skeehan. “Passion–yes fine, you have to have that. It takes more than love. There are actually reasons why behavior happens. It’s not just ‘by chance.’”

Skeehan’s hard work led to results. In 2015, Philly Unleashed won Best of Philly and added exclusive training opportunities for clients at Rammytime Farm in Medford, where Skeehan lives with her husband, Tim, their son, dogs, Uluru and Porter, and a menagerie of donkeys, goats, and chickens.

Now, Philly Unleashed has 11 trainers offering private lessons, behavior walks, group classes, and training at the farm. Most of the trainers, like Skeehan, are CPDT- KA, which requires at least 300 of dog training experience, a signed attestation statement from a CCPDT certificant or veterinarian, and a signed and filed Code of Ethics–all completed even before the examination of 250 multiple-choice questions.

In March of 2017, Jackman told Skeehan there was another litter from Cooper’s parents on the way at Hunters Run Labradors. Skeehan paid the deposit, and then a surprise hit–she found out she was pregnant. “I thought, oh man, I’ve got a puppy. I don’t want a puppy if I’m pregnant,” said Skeehan. “It was my staff and Katelin that convinced me to keep him and that we could do this. So we kept the plan in place and put the deposit down.”

Skeehan had originally wanted a black puppy, like Cooper, but the breeder told her she needed to take a look at a little yellow one instead. Skeehan tested three puppies on responses to startling stimuli, tolerance for body handling and restraint, and prominence of toy and food drive. The little yellow puppy was the smallest one, but Skeehan found him to be curious without being cautious and not sensitive to loud noises or new sensations. After a poll, Skeehan named the puppy Buddha and started an Instagram account, @BringingUpBuddha, to show his journey and training. “It’s not as easy as slapping a vest on a dog and walking onto an airplane or into Walmart,” said Skeehan. “Having a dog just be there is not good enough. It actually has to do things.”

And Buddha works hard. He recently showed off his training at a Flyers game in December 2017, settling in for three hours and refusing to be distracted.  “I was so impressed with this little guy,” said Dana Vachon, a certified trainer with Philly Unleashed who attended the game with Skeehan and Buddha. “Even when people were reaching out for him and trying to pet him, he stayed on task and focused. After the game, when his service vest came off, his puppy side came out while he spent time with the team.”

Now, Skeehan’s baby is four months old, and Buddha is seven months old–and ready for his partner. Applicants are encouraged to apply online through Philly Unleashed’s website until February 1, when interviews will start. There is no cost for Buddha, as Philly Unleashed is providing all of the training, veterinarian needs, and food. To help offset costs, since Buddha’s care and training will cost $30,000, Philly Unleashed has created a GoFundMe page. All funds raised go towards Buddha and his care, and anything additional will go towards his person to get Buddha started on his new journey.

The public is invited to a Yappy Hour fundraiser for Buddha on Saturday, February 17, 2018, from 6 to 8 pm, to raise funds for Buddha’s care and training. The event will be held at PANT Dog Center in Philadelphia, located at 1134 Dickinson Street, Philadelphia, PA 19147.

Raffle baskets, including wine, yoga, and training, will be available. Pups will also have the opportunity to get professional photographs taken for a fee.

Buddha’s partner will train with Buddha free of charge at the farm for six months to a year before full-time placement, and Philly Unleashed will sponsor lifetime training for the pair. “It’s all about the relationship,” said Skeehan. “That’s the basis for Philly Unleashed–dogs can only come train at Farm Camp if they’ve been taking group or private classes, because we want to get to know them and their owners. We want to do the same with Buddha. We’ve built this relationship with him over the past five months, and we want to continue to build on that and include his partner.”

Buddha is intended as a mobility service dog, and there are several stipulations for the right partner, but the recipient will not be charged for Buddha.“My hope is he finds the right person, becomes a contributing member of society, and gets to be with someone who needs him,” said Skeehan. “We’re looking for somebody who is as invested in the success of the pair as we are. This should be someone who is willing to work at it. There will be valleys and peaks. Just because the dog is coming trained doesn’t mean it will be easy. This person will need to be realistic what a dog can do and can’t do, and will benefit in more ways than just being happier or less anxious generally. Buddha, with continued training, will help this person propel to success and be independent.”

Eligibility requirements and the application for Buddha are available online. Buddha has not been trained as a guide dog for the blind, hearing assistance dog, seizure/diabetic alert dog, or autism/anxiety support dog. Requirements include a commitment to commuting to Rammytime Farm in Southampton/Medford, NJ one to two times a week for six months. Help Philly Unleashed with Buddha’s training and expenses. Follow Buddha’s journey on Instagram.